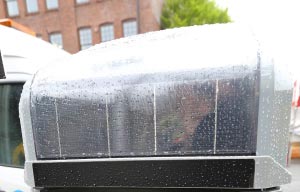 Seattle’s lucrative parking pay stations are being replaced with smarter dispensers that can spit out different-priced window stickers depending on time of day.

The first new “###smart parking” stations were being installed Monday on Occidental Avenue South, near CenturyLink Field, followed by others across historic Pioneer Square in the next two weeks.

Motorists can expect similar two-price arrangements in nearly all neighborhoods as the machines spread, said Mike Estey, parking-programs manager for the Seattle Department of Transportation (SDOT).